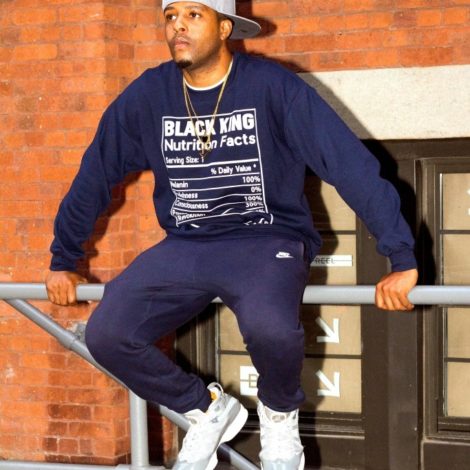 Amari Mar is a independent Hip Hop Artist from Brooklyn New York whose musical influences and taste range from Nas,Biggie,Rakim,Wu Tang Clan, LL Cool J,Big Daddy Kane, Public Enemy and many more. He is a student of the game and pays respect to those that came before him while adding his contribution to the artform. Amari Mar has released his 1st mixtape “Too Many Cooks Spoil The Broth Hosted by Kool G Rap in 2012 and Da God Must B Krazy in 2013. Currently he just released his best work to date, Grand Rising back on March 26 2021.

Have you always been interested in music? What is your story and how did you start making music?
As a child growing up I’ve always been into music and sounds. My grandfather would play Classic Soul and R&B music from 60s,70,80s you name it on the record player. This was in the early 90s. I would sneak into my uncle’s room and listen to his Walkman and listen to the cassette tapes he had at the time which consisted of rap music at the time. I didn’t start making making music till I was about 15 or 16 years old and I met one of my ppls JS who I’m still cool with and make music till this day back in high school. We would record freestyles at his moms basement with the mic hanging from the ceiling. At that time I was just mainly writing and finding myself musically and my sound and meeting different people and networking over the period of years till I officially dropped my first mixtape “Too Many Cooks Spoil The Broth”back in 2012.

What are you working on now? Any future releases we can look forward to?
I just released my new album Grand Rising back on March 26 and so far been getting nothing but positive feedback and great reviews. I’m not working on anything new at the moment except for promoting and pushing the album and doing some features and recording here and there.

What Is Your Ultimate Goal In The Music Industry?
My goal is to keep pushing my music to the masses as far as I can take it and enlightened the listener’s mind. As long as my music gets in the right hands and people appreciate it and support what I bring to the forefront ,that’s all the social currency I need. Everything else will align itself in divine time.

What Has Been The Biggest Challenge In Your Career Thus Far?
Not being able to travel the way I want since covid hit back since last year. But at the same time just learning to adapt to the situation and make moves the best way I can under the circumstances.

How do you go about writing a song? Do you have a melody in your head and then write the other music for it or what’s Your typical songwriting process?
Usually I listen to the beat first to catch the vibe and mood which dictates what I’ll write about and come up with a song concept. Other times I’ll freestyle to the beat just to see how I’ll flow on the track and pick up on the cadence which helps along the writing process when I’m creating a song.

How do you feel the Internet has impacted the music business?
The internet has made it more accessible to listen to music and easier for an artist to create and make his or her own music without having to be signed or managed by a record label. There is more control and ownership of the music that’s being released and its a great platform to utilize as long as you know what you’re doing with the tools that’s being provided.

What Did You Do Before You Started Making Music?
I was attending public school and working at a Nursing Home while in High School. I was into playing Basketball and doing regular things as any average teenager coming up.

Would you have any advice for young people wanting to follow in your footsteps?
Never give up and follow your dreams. Sometimes you have to be patient and don’t let any negativity or negative thoughts consume your mind. Surround yourself with positive people and energy who encourage you and have your best interest at heart.

If you could change anything about the music industry, what would it be?
It would be dope if up and coming /independent artists can rub shoulders and play along side established acts who have been in the game for years. You shouldn’t have to be an open act just to open up for a headliner or sell your tickets just to bring your crowd. The crowd is there already along with people you may bring to the show to show out and support.

How do you feel about originality?
Originality plays a big role in making you stand out from the rest. Ironically that’s not the case in today’s music scene where most of todays artist either sounds or dress the same. Sometimes it may take a while to find that lane that works for you but most importantly just being yourself and staying true to who you are is just as pivotal as being original.

Is there anything else we should know about you? or Something that you would like to add?
Most of the time I like to chill,read and meditate. I love travelling,bike riding and being around dope positive energy and people I can vibe with. Other times I like my solitude and being in tune with nature and one with the Universe.


Tweets by AmariMar
Links to Where Your Music Can be Purchased:
https://amarimar.bandcamp.com/album/grand-rising