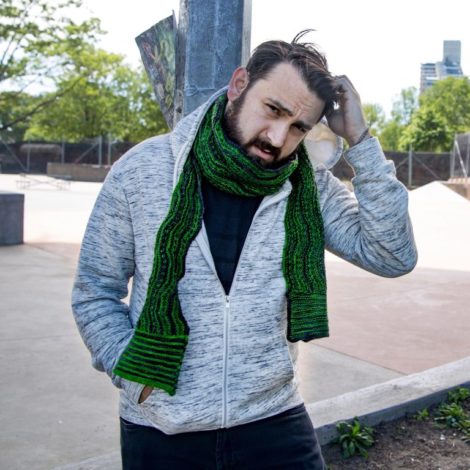 Corrado is a singer/songwriter/producer, actor and knitwear designer based in Astoria, NY. Their first passion was music, performing for family and friends since the age of 3. Most of their life was spent on the stage before COVID-19 hit, and since then the studio is what’s making them happy. Their songs are about love, loss, and the strength it takes to get up each day and look towards a happier future. It’s all about the journey.

Have you always been interested in music? What is your story and how did you start making music?
Ever since I started singing along to the radio as a toddler, I had a love for music. I sang first for family and friends doing shows in the living room or outside for the whole apartment complex to see. I then moved into church choir, which is where I get my harmonic roots. I was always a huge pop and rock fan, but I found myself working in musical theatre after a BFA in acting from Adelphi University. I toured the country performing in various musicals and plays, and had a great time until I suffered a spine injury on a tour. That took some years to recover from, and I’m grateful that it was only minor. I was just about ready to go back to auditioning and hitting the road touring again when COVID-19 hit and all the theatres shut down, I knew I needed a singing outlet. So I started playing around with recording from home, and soon discovered a new passion, one that I dreamt about since I was a little kid, and I’m here to make my pop star dreams happen. It’s amazing the feeling I’m getting in my little bedroom studio creating songs about my life. It’s like I’ve finally found my place in the creative world, and I can’t wait to move it out of my bedroom!

What are you working on now? Any future releases we can look forward to?
I have a full second album almost completed that I’ll be releasing single by single until I plan to drop it this summer. My first record had a sort of mid-tempo pop/r&b vibe, and for this next album I wanted full blown dance tunes, while continuing to experiment with my sound. I’ve begun rapping a bit, I have a punk tune I can’t get out of my own head, and my next single featuring is dropping March 19th. It’s called “Steamroller”, a one day wonder with a lot of math metaphors…it sounds way cooler than it sounds.

What Is Your Ultimate Goal In The Music Industry?
To be known as a great songwriter, and have a sustainable pop career that leaves a legacy of musical greatness. Lofty goals? Nahhhh…

What Has Been The Biggest Challenge In Your Career Thus Far?
Learning to properly record and mix a song. I have a really great ear and create my tracks just from playing around, but making the final mixes sound perfect was new territory for me. Luckily, I’m a quick learner, and I know the next album is gonna sound great. Let’s just say, I didn’t know what a compressor was for the whole first record, and oh what a difference it makes!

How do you go about writing a song? Do you have a melody in your head and then write the other music for it or what’s Your typical songwriting process?
It often starts with a hook or a beat, and the later tends to be my go to. With songs like “Don’t like seeing that” it was totally hook driven. I had an actual reaction of scrolling past someone’s social media page and just sang the hook out loud, then grabbed my tape recorder to remember it. I created the track the next day, recorded the next, and the rest is (going to be) music history.

How do you feel the Internet has impacted the music business?
The internet is a massive tool for anyone in the music industry, or really any industry these days. I love being able to stream music (been with Spotify since the early days) and TikTok has not only been fantastic to promote my music on, but also to learn from other independent artists, producers, and industry professionals on how to go about building a sustainable career with great sounding recordings. Me and my dog, Eevee (@eeveeandrado) are big tiktok fans.

List some famous musicians currently on your playlist
Kesha, The Notorious B.I.G., D’Angelo, Fall Out Boy, The Ting Tings, Billie Eilish, E. Alvin, Britney Spears, Billie Holiday, Sarah Vaughan…oh and some Dua Lipa like the rest of the world. I tend to only mix in a new artist every once in a while, as you can see.

What Did You Do Before You Started Making Music?
I design knitwear, from home and hope someday to also have an accessories fashion line. I fell into designing knits while on the road about 6 years ago, which is yet another creative venture I picked up on my own (like producing/songwriting).

Would you have any advice for young people wanting to follow in your footsteps?
It’s a difficult road at times, but know that you and your work are worth it. Keep your head up, because your time will come, and if you think your time may have already came, know the future is still can get brighter as long as you hold out hope.

If you could change anything about the music industry, what would it be?
I think streaming services generally could pay a bit more, but who wouldn’t say that one?

How do you feel about originality?
I’ve been an original all my life, which is kind of crazy to realize because I spent so much of my life trying to make myself “normal”. When I finally heard the world saying that I could never be normal and I could only be extraordinary, I was able to embrace the fact that originality is the greatest thing we can encourage in each of us.

Is there anything else we should know about you? or Something that you would like to add?
I’m just getting started. I’m an incredibly hard worker, often writing a song a day, many times producing it that day too from my little bedroom in Astoria, Queens. I look forward to being able to travel the world with my music, and I hope we aren’t all too traumatized once COVID-19 is in the past. I can’t wait for us to be together again so we can spread joy in person.


Links to Where Your Music Can be Purchased:
https://distrokid.com/hyperfollow/corradolark/half-moon