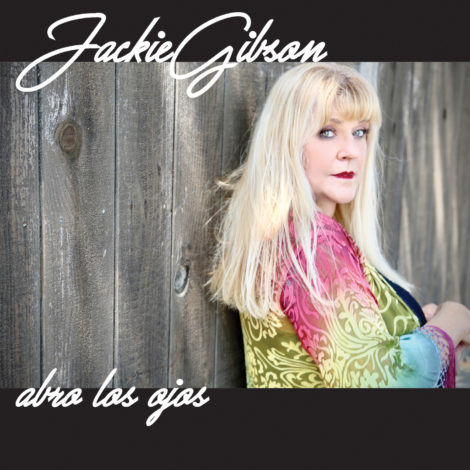 JACKIE GIBSON is rapidly becoming one of the fastest rising new voices in the Los Angeles Jazz/Pop Scene. As with all overnight successes, Ms. Gibson’s musical journey has been evolving for decades. At a young age, her life was filled with music, having a father who sang in piano bars and a mother who put her to bed to classical music. By 16, she was a part of L.A.’s Folk Movement , appearing alongside the likes of Joni Mitchell at venues like The Troubadour and Ciro’s. Over the years, Jackie has performed all over the southland, at popular events in the Redlands Bowl, Barnsdall Park Garden Party, and The Kodak Theater. Proud of her Latina heritage, Jackie is a bilingual vocalist who has been seen on KMEX’s “Nosotros”.
Jackie has received enthusiastic acclaim for her appearances at Redwhitebluezz, Upstairs At Vitello’s, (now re-named Feinstein’s at Vitellos,) The Gardenia, Stoney Point, The Mixx, Smokehouse, Catalina Bar & Grill , the Mbar and the Derrick Lewis’ “Better With A Band Music series” in Palm Springs .
In 2014, Jackie created “JAZZ DEL CORAZON ”, a series of local fundraising events assisting struggling fellow jazz artists in various life- altering states of need. She was joined by several wonderful co- producers for different fundraisers, including Clifford Bell; most recently, working with co-producers , Cathy Segal-Garcia and Gary Brumburgh, to produce the “Jazz vs. Cancer” benefit for WeSPARK Cancer Center and for City of Hope. These events were some of the many memorable LA area music events serving our local based musicians and singers. Through her non- profit organization, Jackie continues to be a strong and vital LA pulse when it comes to the spirit of giving and healing via her enthusiasm for all types of music. Jackie is also, half of the music duo, “Dos Divas”, along with Lorraina Marro. They have done several Latin themed shows , sharing music from their Hispanic backgrounds and telling stories of what it was like growing up Latina, sharing the classic Latino music, that are tradtional and loved by many. Jackie is also a great lover of Big Band music and she is a featured vocalist with the Angela O’Neill and the Outrageous 8 Big Band. She is so grateful to be able to sing the classic and well known songs from the Great American Songbook with such an amazing ensemble. Jackie is following her heart by using her musical talents and professional relationships to provide support and comfort for those in our music community in extreme needwith her non-profit organization. Presently, she is working in the studio with record producer, Stephan Oberhoff, on several
single releases that will be compiled into an EP at the end of 2021. She has also been in the studio with collaborator, cabaret singer-songwriter, Wayne Moore, recording the music for their upcoming children’s story/book.

Have you always been interested in music? What is your story and how did you start making music?
I have always been into music since I was a little girl, having a father that used to sing in piano bars in Hollywood and my mother used to put me to sleep with classical music. I was enthralled with all of the music created in all of the animated Disney movies. In the 6th grade, I first learned how to use an autoharp and wrote my first musical/play. In junior high, I began to study voice and studied classical and folk music. . In the 60’s I began to sing during the folk-rock era in Los Angeles, in clubs like the Troubador and Ciro’s. In the ’70s, I was in a country-rock band in college and used to sing at The Palamino Club and the Bitter Ashtray, the on-campus club at USC. I attended the Dick Grove School of Commercial Music, being introduced to jazz music, graduating from there and I was singing with big bands, and performing jazz standards. Through my boyfriend, who was a horn player, I met John Harden, who was a horn player for David Bowie and Iggy Pop, and his writing partner, Larry Vineyard, and we began working on original pop/rock songs they had written. We played the LA Circuit and added players guitarist Paul Warren(Rod Stewart, Tina Turner) and Bassist John Hatton( Brian Setzer, Big Daddy) and did shows at Madame Wong’s East and West, The Central(Today it is the Viper Room.) Recently, I have been doing fundraisers through my non-profit, Jazz Del Corazon Benefit Series) producing shows for musicians going through financial hardship. We have done fundraisers for the City of Hope and WESPARK Cancer Center, having many of our LA Music family performing, to give back, being cancer survivors, themselves. Being Hispanic, I had a love for Latin music and i became involved in the group, “Dos Divas”. We had great players such as Steve Rawlins, our music director/pianist, Dr. Bobby Rodriguez on trumpet, Jennifer Leitham on stand up bass, Steve Pemberton on drums, and Grant Geissman on guitar. We played at Catalina Bar and Grill and at Vitello’s and had such a great time singing the traditional songs of Mexico and some contemporary songs by Linda Ronstadt. I also have been a guest vocalist with Angela O’Neill and the Outrageous 8 Big Band. I really love singing such wonderful songs from the Great American Songbook.

What are you working on now? Any future releases we can look forward to?
Presently, I am working on releasing several singles, which will be part of a compilation, to be released in the summer of 2021. One of the releases, “My Eyes Are Open” was a song, I used to sing with my rock band and I always felt very drawn to this song and wanted to re-do it. It is a very powerful song, written by Stephen Michael Schwartz and Steve Perry. It reminded me of the struggle my mother went through, to come to the United States, to fulfill her dreams of becoming a doctor. Stephen wrote it about his own grandmother, coming through Ellis Island to escape the tyranny in Europe, It truly applies to what our nation is going through right now. I, also co-produced a music video for this song, with music producer, Stephan Oberhoff, (who works with Melissa Manchester, Roslyn Kind, Brenda Russell, Jason Gould,) at his Pasadena based studio, “The Creation Station ”
You can see and hear the song on Youtube. I also recorded it in Spanish, titled “Abro Los Ojos”. It is also on Youtube. This release has been acknowledged as “a very powerful song, that must be heard” by music reviewer Scott Yanow. I am presently in the studio, with Stephan, working on my next release, which will be around the middle of this February.

What Is Your Ultimate Goal In The Music Industry?
First, I wish to finish the compilation I am presently working on, by the end of the year. I want to continue producing “Jazz Del Corazon ” fundraisers in our LA Music Community, for those in need. I hope to have the opportunity to take my music to Europe. My ultimate goal is to have my children’s stories made into animated films with music , written by Wayne Moore and myself. Plus, I have been working on my mother’s life story and writing music for the story.

What Has Been The Biggest Challenge In Your Career Thus Far?
During this past year, because of the pandemic, I decided to focus on the positive things I have been wanting to work on, with my music. I have been able to focus on creativity, writings, and composing. Being bombarded with so much negativity, I kept myself from watching too much of the news and enjoyed working on my passions. It has been a great exercise in focus and staying on track.

How do you go about writing a song? Do you have a melody in your head and then write the other music for it or what’s Your typical songwriting process?
I enjoy writing poetry and lyrics. Most of the songs I have written were for the children’s stories I have written. Sometimes, I may have a basic melody in my mind, and then, I share it with Wayne and he composes around the basic theme I showed to him. I love working on background vocals, as well. It’s amazing coming up with the right background vocals, how it can enhance a song, giving it such emotional expression. All of the songs I used to sing in the ’80s were originals. Many of them can be re-introduced in today’s music. I feel they are timeless.

How do you feel the Internet has impacted the music business?
it’s so different now when way back when you would have the record companies come out to hear you play at a club. And the A&R executive would come and hear you play live and Oh the audiences! How great it was performing to a live audience! being able to connect with the audience…to pull them in and take them on your journey in song…And now, the internet has given music the chance to expand, to be heard around the world, and to be able to connect with other musicians. Being able to access all types of music and connect with other musicians has been astounding. It’s a whole new realm and opens the door, to so much more. Right now, because of the pandemic, there are classes being offered on the internet, zoom chatrooms, concerts being televised… I am grateful we have it to stay connected with our fellow singer/musician friends…At this time in our lives, it has been a saving grace to keep our sanity..

What Did You Do Before You Started Making Music?
I was so young when I got interested in music.. I did do a variety of work, to be able to pursue my passion. Everything from being a bi-lingual Teacher aide/music teacher and a number of administrative office jobs, plus working in a medical office for many years…But for me, being a mother was the greatest achievement in my life … and having my music to be a part of the growing years, sharing music with them…I felt very lucky…, I was grateful to be able to balance the 2 most important parts of my life, granted, at times, it was not easy. And there were alot of sacrifices through the years. But it can be done, balancing home life and family life.

Would you have any advice for young people wanting to follow in your footsteps?
Learn your craft to the best of your ability. Be open to all avenues of music. Respect your fellow musicians. Each and every person has their own voice, their own sound, unique from everyone else. Build camaraderie amongst your fellow musicians. Collaborate together to be of service in this world, in helping others, less fortunate than yourself. Use your music to bring happiness, to evoke a memory, to inspire, to give back all of the joy it has given you.

If you could change anything about the music industry, what would it be?
I look forward to when we can all come together and sing and perform, once again.

It’s not easy to go back to simpler times, with all of the advances in technology, but if we could go back to the simplicity of live music performance, outdoor concerts, coming together for jam sessions, it would bring back the unity, the spirit of just enjoying the music we create together. Keep the joy in the music. Keep the heart in music. I look forward to us being able to get back to doing these things.My hopes

How do you feel about originality?
It’s wonderful! The freedom of self-expression is inspirational. We should all be encouraged to try out our own voices, our own creativity in the music. Each of us has our own life song and we should never be afraid to sing it.


Links to Where Your Music Can be Purchased:
https://cdbaby.com/