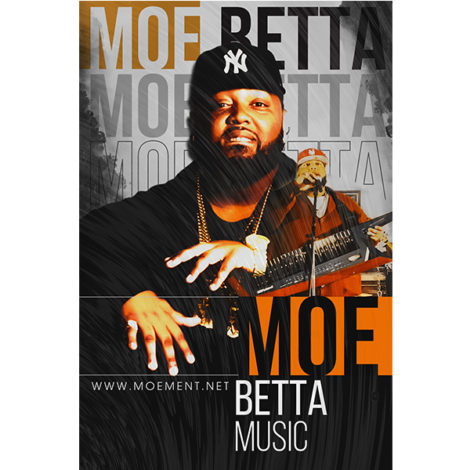 A Native New Yorker, and a self taught Musician/Producer

Has been on the fast track of showing that there is more to him than meets the eye.

His abilities are limitless and he’s ready to seize his MoeMent so Get Ready!!

Moe Betta has worked side by side with some of the worlds most talented Producers, Dj’s, and Artists. Betta got his start when a co-worker introduced him the Legendary Heatmakerz out of the Bronx. During that experience he produced and co-produced artists such as Raekwon of Wu-Tang Clan, Mobb-Deep, Razor and also had featured material on the Dj Kay Slay Street Sweeper Volume 2 Album. Later on, creating countless material with Wyclef Jean and Jerry Wonda, Betta was able to display not only his ability to play the piano but also his ability to rhyme and ghost write for others. “A triple threat” is what Wyclef considered and titled Moe Betta. Betta has solidified he has what it takes to soar in this industry. Sky is the limit to all that you can achieve.

I started making music following my older brother ‘s footsteps. What kid would not want to be like their older brother. At the age of 8 I stared rapping, at the age of 13 I was introduce to making beats. The pieces of the puzzle did not come together until I was 15. That’s when I start learning how to play the piano amongst other instruments. With dedication, commitment, and hard work fueled by passion , I was able to travel the world playing for many of your favorite artist. From gospel, Hip-Hop, Jazz and many other genres. I created music with and for some of the biggest names in the industry and been apart of the opening acts on many tours. With all of that experience, I decided to step from behind the keyboards and MPC to share my ideas and my passion with the world.

What are you working on now? Any future releases we can look forward to?
Being that I have my own studio, I record daily. I do this so I can have multiple options in submitting music to different platforms. My plan during this pandemic is to build more of a social media following and release music quarterly to capitalize off of the MoeMentum generated thus far.

I am planning on releasing a single entitled “CRUSH” in June of 2021 along with multiple videos of live performances.

What Is Your Ultimate Goal In The Music Industry?
My ultimate goal is to sign talent of all ages and all genres and teach them game that we call “The Industry”. Today the world focus more on numbers than they do talent. I want to reverse that order. Many talented artist are over looked because of that.

What Has Been The Biggest Challenge In Your Career Thus Far?
My biggest challenge in my career was knowing what I wanted to do and how I wanted to be perceived. Being gifted musically in many different areas, honing in on one craft could be difficult. Do I want to be a jazz musician? Do I want to be a road musician playing for artist? A producer? A rapper? Once I figured out to be myself no matter what and how to incorporate my talents to work in my favor. The difficult part was done. Now I have to break thru an Industry that is shut down right now .

How do you go about writing a song? Do you have a melody in your head and then write the other music for it or what’s Your typical songwriting process?
Each experience has been different for me.
I don’t have a rhyme and reason to how I write and record. I’m inspired by everything around me. Some days I catch a vibe and record music based off a melody running around in my head, and some days I see something and start free styling then come up with a concept and build the beat around the energy of the flow.

How do you feel the Internet has impacted the music business?
The internet has been a double edge sword. You could use it to your advantage and it could be used to your disadvantage.

We as artist now have access to the millions of consumers and don’t have to go through the record labels who take more than half your money to recoup their expenses. The internet has removed the middle man from the equation and formula of success.

That is a beautiful thing when there are no executives telling you what music you can and cannot put out. It feels good to follow your agenda oppose to listening to what some one in a office telling you to be what you aren’t just so you could sale records.

On the flip slide no more records are being sold and even though streaming is a great way to get paid in the long run, independent artist have to work harder for their streams to bring back revenue and a profit after their investment. If you could buy oppose to stream there are a lot more benefits. Your fan buy ten songs at $1.99 you get an estimate of $20 dollars. Streams pay out up to $ 5 dollars per 1,000 streams. You do the math. It’s all about perspective
List some famous musicians currently on your playlist
50 cent
Jay-z
Kanye West
Big Shawn
Drake
Musiq SoulChild
Megan Thee Stallion
Cardi B (Bronx girl)

What Did You Do Before You Started Making Music?
Before making music I played Basketball and was on the road of being an athlete. As far as jobs and all of that. I played music and made a good living doing that.

Would you have any advice for young people wanting to follow in your footsteps?
The only advice I would give anyone is to be true to themselves and whatever you want to do, study research and educate your self so your able to negotiate and manipulate anything to work on your favor, and work towards exactly what you want . The percentage of success rate will increase if you are aware of how your particular industry operates.

If you could change anything about the music industry, what would it be?
I would change this while numbers game. Meaning. Just because you have a million followers that doesn’t mean you deserve a record deal. We should base this off of talent and influence. Now a days you could buy followers.

How do you feel about originality?
Originality is great but even the most original person immolated something they found intriguing.

Imitation is a form of flattery.

There’s nothing new under the sun. But if you could put a twist on it go for it.

Is there anything else we should know about you? or Something that you would like to add?
If there wasn’t money or fame involved. I still be doing music


Links to Where Your Music Can be Purchased:
https://distrokid.com/hyperfollow/moebetta1/unleashed