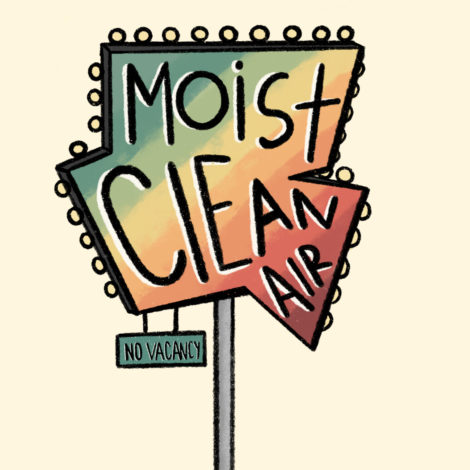 Starting in the year 2000, three friends convened over a mutual love of music and formed MoistCleanAir. Dan Satterlee, vocals/guitar, Todd Thomson, bass/vocals, and Blake Minklein, guitar. We started making demo tapes and around 2002 started playing shows around the Seattle Area. Around 2004, Dan, tired of grinding away at the music scene in Seattle, joined the U.S.Army as a Special Forces Medic, and spent 13 years collecting gear, recording songs, and honing his songwriting skills. While stationed at Fort Bragg, NC, Dan played with John Scrudder on drums and kept MoistCleanAir alive. In 2019, Dan returned to the Seattle area and got the band back together. They were joined by Tony D’Angelo on drums and are now working at getting shows booked in the new covid reality.

Have you always been interested in music? What is your story and how did you start making music?
I’ve been into music since I can remember, listening to David Bowie and Devo Records before going to school in the morning. While most kids watched cartoons, I was immersing myself in a musical world. I was smitten by music and from that early age, always wanted to be in a band and make music. I started playing the violin at a young age, but the instrument didnt call to me. When I was 17 I decided to learn guitar, and it was love at first sight. As soon as I learned more than three chords I was writing music. This evolved into other instruments, bass, drums, keys, melodica, etc. I started recording my own stuff pretty quickly, using two boomboxes to record multiple tracks. I would play into one boombox and then play along to the tape into the second one, repeating the process. This added a weird helium effect to the early songs. This formed the basis for my love of recording. This evolved with technology, from 4-track cassette machines to DAW’s.

What are you working on now? Any future releases we can look forward to?
Right now we are working on getting gigs.

What Is Your Ultimate Goal In The Music Industry?
To spread my music to as many people as possible. I want my music to blow some kids mind, the way my favorite artists blew mine.

What Has Been The Biggest Challenge In Your Career Thus Far?
The music industry itself. We were a little weird for the scene back in ’02, and now we might be too weird for the scene now. Covid has also put a damper on live music, and thats been a challenge. We’ve been ready to go for awhile now and all we can do is wait until restrictions are lifted.

How do you go about writing a song? Do you have a melody in your head and then write the other music for it or what’s Your typical songwriting process?
It usually starts with a Bass or guitar. I mess around with riffs and progressions until I find something that catches my ear. Once that happens I lay down basic tracks and start building the song from the bottom up. I never know where a song is gonna take me, or what its going to eventually turn in to, which is my favorite part of writing. Building something from scratch that no one has ever heard. Sometimes I have to chip away at the song like a sculptor, finding the song underneath, some times it comes easy. Occasionally Ill write a song based around the prewritten lyrics, but thats rare.

How do you feel the Internet has impacted the music business?
Its been positive for people like myself, with no label to appease, I can release whatever I want, whenever I want on multiple platforms. Unfortunately, streaming services don’t compensate the artists sufficiently, so I can see how it negatively effected some artists that were already established.

What Did You Do Before You Started Making Music?
Ive worn many hats over the years, from Sous Chef in an Italian restaurant to Special Forces Soldier, but through it all I’ve always been making music. Music is the common thread to my life.

Would you have any advice for young people wanting to follow in your footsteps?
Don’t. Make your own path in life.
If you could change anything about the music industry, what would it be? I am not impressed with current big name artists who dont write their own music. I know its prevalent in the music industry, but to me its just fancy karaoke. Take Beck for instance- he does it all and makes it look good, while people like Beyonce and Cyrus need other people to write their stuff for them. I think its pretty weak.

How do you feel about originality?
Whats the point of art without originality? Its the most crucial part of any art form. You can have influences, you can rip other people off, but if you can tell, then its not original enough.

Is there anything else we should know about you? or Something that you would like to add?
…


Links to Where Your Music Can be Purchased:
https://moistcleanair.bandcamp.com/