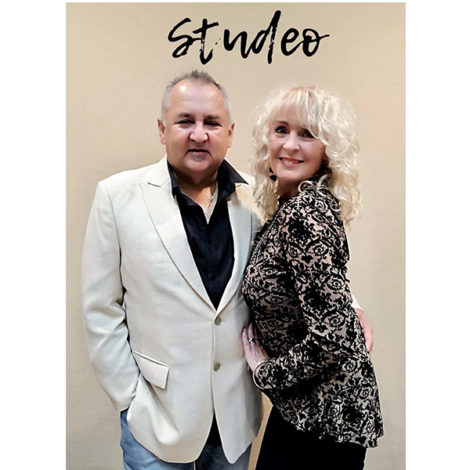 STUDEO
When Jeremy and Christine Stork first joined forces in the late ’70s (in the popular cover band Casablanca), they had no idea what the future would bring, or that their union (both matrimonial and musical) would evolve into the beautiful, genre-defying mix of melody, vocals, and top-notch production which, as Studeo, has led to – in less than four years – multiple single, EP, and album releases, a record deal, and international acclaim.

Bringing a wealth of talent and decades of experience (Jeremy played guitar for Melbourne’s Moby Dick prior to the formation of Casablanca, opening for such legends as the Little River Band, AC/DC, and Skyhooks; Christine has played in multiple cover bands and is a formally-trained vocalist), Studeo’s songs are as refreshingly real as their love for the music and one another is enduring.
Following 2017’s release of not one but three EPs (including two songs which rose on international charts to levels previously unseen by an Australian independent act), Studeo signed with Bongo Boy Records, who included their song “Our Perfect Place to Be” on a compilation CD, “Love Is.” That song went on to win the Jazz/Blues Song of the Year honors at the 2018 Josie Awards (considered the Grammys of Independent music), held in Dollywood in Pigeon Forge, Tennessee. In August of 2018, the label released the duo’s first full-length album, “These Are Our Days.”
2019 saw the release of the duo’s second full-length album, “You’re The One” and yet MORE AWARDS AND AIRPLAY. Jeremy and Christine continue to expand their musical and songwriting horizons in 2020, even while remaining mostly at home in Australia due to Covid-19. They used their time productively and released their 3rd full-length album, “Dancing On The Beach”. They’ve received three 5-star commendations for songs submitted to the UK Songwriting Competition, five nominations for Josie Music Awards, eleven nominations for the Red Carpet Music Awards in Holland in November (where they’re also slated for the judging panel) winning Jazz song of the year for “Our Perfect Place To Be”. They were named finalists in the World Songwriting Awards for Best Pop Song for the title track to their new album “Dancing on the Beach.”
November 2020 saw another burst of creativity from Studeo with the release of their EP “The Storm” which includes their popular song “Can You Imagine” (the video for this song received over 7,000 views in one day).
They’ve also written the songs for a further album, “Life’s A Journey”, which will be released in early 2021.

Have you always been interested in music? What is your story and how did you start making music?
Yes , both Christine and I have been interested in music since we were teenagers. I started playing guitar at around 15 years old and started playing in bands straight away. I played in a band during high school and then began playing in a band called Moby Dick when I was 18. We did a lot of work around the Melbourne pub circuit and supported a lot of the top Australian bands at that time including Little River Band, ACDC, Billy Thorpe and many others. Christine began singing in her late teens and took singing lessons after some success in a jingle competition. We both started playing together in a band called Casablanca which last for many years. Casablanca was a cover band and we play at some of the major function venues around Melbourne …..We started writing music seriously in 2016 and joined up with our producer Paul Rockwell at that time. Paul introduced us to a promoter in the US who took us on and we started to get airplay on some of the idependent radio stations around the world.

What are you working on now? Any future releases we can look forward to?
We currently have 2 new albums in the pipeline:, “Life’s A Journey” and “Silence”.
All of the songs on these albums were written in 2020 and 2021 during the Covid pandemic. We were able to take advantage of the restrictions on our travel and really focus on writing and recording over this period.

What Is Your Ultimate Goal In The Music Industry?
Studeo has been blessed by winning many independent music awards and have even been accepted into the first round of voting by the Recording Academy in LA, for the past 3 years. Our goal is to continue writing and recording and achieve consistant airplay around the world….including Spotify playlists etc….Broadly speaking our ultimate goal is to have our music recognised and enjoyed by as many people as possible around the world.

What Has Been The Biggest Challenge In Your Career Thus Far?
There are many and constant challenges in the music industry. I think the biggest ongoing challenge is to be recognised and accepted for airplay by both independent and mainstream radio. It takes constant effort to build the right relationships and contacts to maintain steady airplay.

How do you go about writing a song? Do you have a melody in your head and then write the other music for it or what’s Your typical songwriting process?
Studeo doesn’t have a set formula for writing our music. It often comes as a random idea which we develop. These ideas can be words, phrases, chord patterns or melodies that come to us ….we always travel with a guitar close by and our smart phones which we can record ideas on and capture any lyric ideas.

How do you feel the Internet has impacted the music business?
The internet has had a major impact on the music business. We now have the ability to do most things required to create, record and manage our music ourselves. We have a home recording studeo, we also have the ability to do minor promotions on social media including graphics, photos and presentations. Our business is very portable and we can write songs even when travelling.
Years ago these things were not possible and you had to purchase these activities or get a recording deal.

What Did You Do Before You Started Making Music?
We both started playing music at a young age. Whilst we both had day jobs throughout the years our main interest outside of music has always been travel. We have been fortunate to have been travelling since we both got together. We did our first major overseas trip in 1980, visiting Europe and travelling around on the trains, We have been able to combine our music and travel particularly in the US.

Would you have any advice for young people wanting to follow in your footsteps?
The key to developing a music career these days is having a set of skills that will enable you to do as much as you can in creating and managing your music. So, developing computer skills, graphics and having an ability to write well. The more you can do yourself, the better off you are and you afford to support your music.

If you could change anything about the music industry, what would it be?
The industry has a lot of issues in regards to access to playlists and in particular providing fair monetary compensation for content (music and video). There needs to be a globally agreed system for the distribution and compensation of music.

How do you feel about originality?
Studeo plays all of our own music and is very original both in our songs and sound. It is a key ingredient to move ahead in the music business.

Is there anything else we should know about you? or Something that you would like to add?
Studeo is very fortunate to be a combination of two people who are married and have similar musical interests. We are able to bounce ideas of each other at any time and hence we are very productive with our writing and recording.


Links to Where Your Music Can be Purchased:
Apple Music/ iTunes
https://itunes.apple.com/us/artist/1187594495
Spotify: