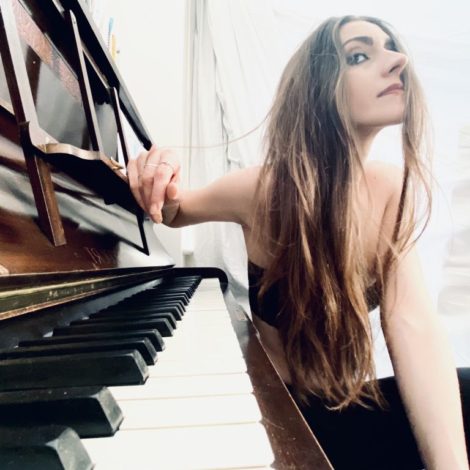 I formed my first band when I was 17 back in St Petersburg. Band called Big Black Glasses with me on the vocals, keyboard player and a drummer, we played some mixture of future-pop, industrial and trip-hop on the various festivals and gothic parties around Russia. In 2012 I came to London and I performed in a female duo “the Sekond” in which we both sung and played one piano in 4 hands, it was very unique project. It was the same year that I met my husband Mark Verney (former Slaves to Gravity and Ariel-X guitarist) and we formed the band Never the Saint. We realised an EP and two music videos.
I now work within a circle of musicians in London, and we form a loose connective that comes together to make musical projects, the latest of which is my recent album ‘Paranoia’, which is a culmination of my musical and cultural influences since being here in the UK.
The music which inspired the creation of this album included PJ Harvey, Nine Inch Nails, Massive Attack, Regina Spector, and the Velvet Underground, to name but a few! My aim with music is to transport the listener temporarily away from the stresses and drudgery of everyday life, and to connect them with the inner creativity of the soul!

Have you always been interested in music? What is your story and how did you start making music?
I was one of those kids who started singing before speaking. In order to remember something I needed to make a song out of it. I went to a music school at age of 7. There are state music schools in Russia which you attend 3-4 times a week after a normal school, it is great opportunity to learn music for children from all the backgrounds, I think Western Educational system is lacking something like that. I started to write songs at the age of 15 when I finished music school and felt the freedom to play whatever I wanted. I was into Gothic culture in that moment and my songs were quite dark and gloomy. To be honest, I wonder how anyone brought up in Russian culture cannot get totally consumed with its tragic past, leading to existential emptiness together with vast nature and ancient mystic traditions built around it. It always fascinates me.

What are you working on now? Any future releases we can look forward to?
Now I am working on my first album in Russian language. Missing my home country and a bit of my self-identity has inspired me to do it. I have just released my album “Paranoia” and working on a few songs in electronic genre. I am not sure I will have a patience to commit another album, also this format is getting a bit old-fashioned, I think, but a single or 2 will be definitely out there soon.

What Is Your Ultimate Goal In The Music Industry?
When I failed to meet all my previous goals in the music industry, I gave up music for a moment, but I quickly realised that I cant live without it and the process of working on my songs makes me feel complete and happier. The silence in the crowded room, when I am like a teleporting it somewhere else, is the best feeling ever and I am thriving for the opportunity to do this magic again.

What Has Been The Biggest Challenge In Your Career Thus Far?
Music is quite expensive hobby, before you can start making money you need to invest a lot in your education, equipment, promotion, the list can go on and on. Even if you earn money from it, unless you are quite big artist it is nothing compare to you spendings. Therefore, most of us have to have a normal jobs to fund it along with the living costs and then I need to find time and emotional resources for my art. It is difficult.

How do you go about writing a song? Do you have a melody in your head and then write the other music for it or what’s Your typical songwriting process?
Moments of inspiration tend to happen to me when I least expect them, I just suddenly feel that I have to sit on the piano or pick up the guitar. The song just pours out of me, most of the time with some lyrics as well. It is hard to complete the song in one go, but from my experience I know that I need to do as much of it done as possible while I am in the moment. Then im listening to my drafts and try to complete the lyrics and the missing fragments, sometimes the process is slow, because I can’t relate to the lyrics which came to me initially with the song, but I know that in few years I will be able too. Its so weird how prophetic art is. I’ve talked to some of my fellow songwriters about it and they agreed that that they also have written songs in the past which perfectly describe their current feelings and live circumstances. Coincidence?

How do you feel the Internet has impacted the music business?
Like in any other business If you are good with social networking you can make it work. These days frequency of your appearance favours the quality and being a good blogger is quite important part to the success. It is great in the way that you don’t need to hire a professional studio and record an album to show your talent you can just film yourself on your phone. But the problem is that not everybody can do this or have a close friend to do it for you. Maybe there is a diagnosis for this but I personally really struggle to post on social networks, I know I have to, because there is no other way. I was working on my album for a few years and the picture of my cat received 3 times more likes. It hurts.

What Did You Do Before You Started Making Music?
Before coming to London I used to work as a projectionist in the cinema theatre in the centre of Saint-Petersburg, it was a perfect job for a songwriter, you start the movie and then you can sit in your little room and write some tunes, it was very inspiring environment!

Would you have any advice for young people wanting to follow in your footsteps?
One of the greatest advices I had was from film director Omid Nooshin, we worked together on our music video Bleed( sadly, he passed away few years ago), he showed me then that you should never hesitate to approach people with offers for collaboration, promotion, endorsement or any other help. The worst can happen is little humiliation of refusal, so you need to learn how to get over it, because all the other agreements can open you many doors and bring some great results! Good luck!

If you could change anything about the music industry, what would it be?
I wish the industry was driven by the intention to make the world a better place, not a profit. That would be great! My realistic wish is more fair distribution of the royalties from the streaming services to start with.

How do you feel about originality?
It has to be genuine
Is there anything else we should know about you? or Something that you would like to add?
My aim with music is to transport the listener temporarily away from the stresses and drudgery of everyday life, and to connect them with the inner creativity of the soul!


Links to Where Your Music Can be Purchased:
https://music.apple.com/gb/album/paranoia/1546971461