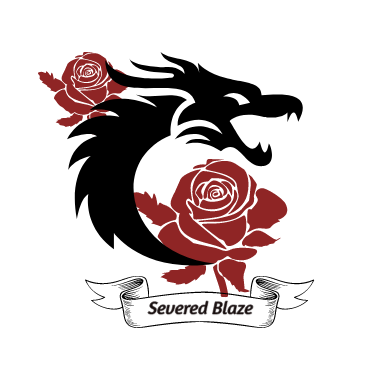 We are Severed Blaze, based out of the greater Greenville area in South Carolina. We would love for you to take a moment and listen to some of our awesome tunes. We have several influences, ranging from Metallica, Nirvana, Halestorm, The Doors, Foo Fighters, Evanescence and Breaking Benjamin all the way to a dog named LEO, but you guys will learn more about that later. Vocalist Shalina Cannon and Drummer Carrie DeBarr, founded Severed Blaze in October 2019 with a few simple facebook messages. Shalina had posted she wanted to start a band, and Carrie immediately responded. It started with an idea that became much more. Shalina comes from a music family, as her great grandfather played with Arthur Smith and the Cracker Jacks. Shalina has worked with Darren Crisp, of Crisp Recording in Arkansas, and performed in a group known as Age Of Liberty. The Drummer, Carrie DeBarr, grew up in a small town, with a dad who had love for music .She loves to play her drums though. Carrie has been in a lot of bands, one of notoriety, The Ride. The Bassist, Bill DeBarr, is very talented with his bass with deep musical roots. With a simple beat he made when he was 16, he helped Severed Blaze develop the riff into one of our proudest songs, Lost at Sea. His musical background includes many bands, participating primarily in “The Ride” with his wife Carrie. Our rhythm guitarist simply goes by Rooty. He is a proud vet, and before ever deciding to be in a band, he mostly just played on his own and did side projects. He loves his guitar and loves his beard just as much. The lead guitarist, Scott Chapman, has an amazing ability to pick up and play, many projects have come to pass, but he is happy to be in the Severed Blaze family. We have a lot of sounds that go into our music, we consider ourselves Progressive Alternative Rock. Our songs have a unique mix of classically grungy hard rock. We like to project a wide variety of candy for your ears and pull from all of our experiences and interests to deliver exciting and enjoyable music. You will have to come see us play to get a taste. We have recorded three songs in the studio for your listening pleasure, and released them this past year, with outstanding support, reviews, and feedback, and we are eternally grateful for being hosted on your stations and giving us the opportunity to reach so many listeners! Severed Blaze looks forward to accomplishing more in the time to come and we sure hope you will join us for the ride!

Have you always been interested in music? What is your story and how did you start making music?
Shalina – Yes, I started by writing music very young, I loved to write songs as a child. Music is something that has always called to me.

Carrie -Grew up with a father that played and recorded music; learned to play guitar at a young age, switched to drums and joined The Ride, and now a drummer for Severed Blaze.

Bill – I have always loved music…my mom was and is a great singer…..got my first bass when i was 12 plunked around on it here and there….became a singer in my first band…Hit and Run…a classic rock cover band…when i was 16…then was a singer in another band called Affirmative Action …another cover band…then moved to SC and having started playing the bass a great deal joined the band The Ride as a bass player and vocalist, and now in the awesome band Severed Blaze

Rooty – Of course! I think most of us that create music in any capacity have always had an interest in music. I sang in chorus throughout my school years and first picked up a guitar at 14. I’ve been teaching myself since then, playing mostly solo and for personal pleasure, and randomly along the way these wonderful musicians picked me up and here we are.

Rooty– We are mostly refining our current setlist, having finally found our missing piece of the puzzle in Scott’s lead, we are making sure everyone is tight and ready to go for our next show. Without spoiling too much, the next thing for everyone to look forward to is a remaster of a current song, Nevermore, and our next brand new song Alive or Blind. We do have quite a bit on our plate at the moment, though.

Scott– I am working with Severed Blaze, learning their style and riffs, finally getting comfortable with the sound. Yes I see a lot in the future as we grow closer in our family.

What Is Your Ultimate Goal In The Music Industry?
To achieve what everyone wants to achieve. To have the career they dream of. Make money doing things you love, while inspiring other people to play. No matter how old or young you are, you can always learn, you can always play.
What Has Been The Biggest Challenge In Your Career Thus Far? Shalina – Covid -19 and I know we are all tired of hearing it, seeing it, and watching its destruction.
Carrie – covid-19
Bill – Balancing music and all the other stuff I got goin on
Rooty– Honestly for me, everything. This is a completely brand new experience and something I never thought I would be a part of.
Scott– I would say feeling comfortable behind your instrument, playing with no flaws, pure joy, and finding excitement in what you do.

How do you go about writing a song? Do you have a melody in your head and then write the other music for it or what’s Your typical songwriting process?
Shalina – I can either hear a beat that my band creates, and words form within just moments, or I can have a feeling, and the melody just comes with the music.
Carrie – Everything we do we do as a group.
Bill – Our song writing is a group effort with our combined creativity, that’s why they are so bad ass.
Rooty-Our process is multifaceted. We have created songs based off Shalina’s melodies, Bill’s bass riffs, random warmup practices pieces- you name it. Our music comes naturally one way or another, we all just pool our talents into our song and get it wrong enough times that we eventually get it right.
Scott– Music comes first and then the lyrics, I like to have a recorder or some way to remember the emotion. Then I take the pieces and put them together in some form. Sometimes I just play and plug in and something happens.

How do you feel the Internet has impacted the music business?
Shalina – I feel like it has helped, but also damaged it.
Carrie – The internet is really cool to get the word out there you know?
Bill – I think the internet is a great tool for musicians to get their music to the masses easily.
Rooty-Two fold: it was super easy to get our music out there, which I am grateful for, but also it can flood the market and if this is your career, I suppose income can be affected depending on the route you take.
Scott– I think it hurt and helped, we used to go to record shops and actually buy the music, but now you just go to youtube, and it;s there in your hand, but I like knowing it’s there.

What Did You Do Before You Started Making Music?
Shalina – I’ve always created music, it wasn’t until I was older that I learned to establish it.
Carrie – Home Health Care Nurse
Bill – Was and have always been a mechanic. If it runs on a fossil fuel I can fix it.
Rooty– I was in the Army for quite a bit of time and I’ve been going to school since then. This was an out of the blue chance and I dove for it.
Scott– I lived at home with my parents, played guitar in my bedroom.

Would you have any advice for young people wanting to follow in your footsteps?
Shalina – Keep playing, because a master of the art has failed more times than you have tried. You will always reach your goal if you aim for it. Do what you love, no matter if anyone else disagrees. Be yourself, Always.

Rooty – Find something you can’t get enough of and pursue it with every fiber of your being. If you start now but fail, you will still be further along than if you never start at all.

If you could change anything about the music industry, what would it be?
Shalina – Needs more original music, not covers, of covers, of covers.
Carrie – I really don’t know
Bill– IDK
Rooty– I haven’t given this a thought before, I’m not sure. I think it’s undergoing many natural changes on its own, though.
Scott– I would bring back in the old school dinosaurs, and give back the rights of punk rock alternative and pop grunge. Hip Hop has invaded the scene by way too far.

How do you feel about originality?
Shalina – I feel as though Originality is very important. It shows what an artist is feeling, and a way to make you feel too.
Carrie – Being original and standing out, is the best way to be. Always be yourself.
Bill – Originality is key, Especially in this world of remaking everything.
Rooty– I think it’s pretty important, yeah? I mean there are only so many chords and notes and harmonies and melodies that can be created, sure, but everyone has their own touch they can add to make something just a bit unique and special.
Scott– It makes me happy, I prefer to create music and not copy others. I believe it gives you more of a chance to express yourself

Is there anything else we should know about you? or Something that you would like to add?
Shalina – I am most definitely the weird one.
Carrie – I love my family and my band family, they are my life.
Bill – I am a crazy biker.
Rooty – Just a big shoutout to everyone involved in this process. Like I said, I never thought I’d be here; making music, people listening to our music, enjoying our music, an interview in a magazine. It’s surreal, honestly, and I can’t wait to see where it all goes.
Scott– Nope, really just happy to be here.


Links to Where Your Music Can be Purchased: @itunes
@spotify
@pandora
@amazonmusic