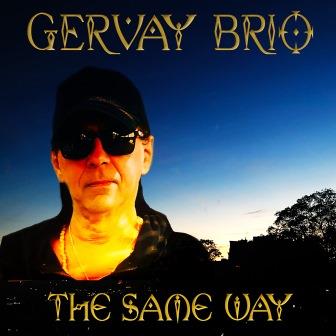 Akademia Music Award Los Angeles Gervay Brio is a french artist, deejay-producer, guitarist and singer, powerhouse, incredibly prolific, with over 30 releases, his name appears on many different compilations of artists from nations far and wide, #1 rank charts NumberOneMusic, ReverbNation, DjBarometer… A modern-age knight, who isn’t just a pretty face on a pulsating track; he’s also a humanitarian who has lent his skills to multiple international charities, such as “Kalagia” an album to benefit the victims of the tragic Nepal earthquakes and “Over The Rain” a piece for a film made to support the fight of Baba Amte against the intentional flooding of the Valley of the Narmada in India. It’s not often that talent and responsibility come together in one personality, but Gervay is living proof that it does, again with his releases “Healing Messenger”, a tribute to victims & fighters of disease, and “Orgonia” feat Dc Wilhelm Reich…
Gervay Brio dubbed « Maestro Dj » by the Miami Winter Music Conference Jury is a major explorer and pioneer of electronic music in France since the 80s, from New Age to Progressive House, a virtuoso guitarist, and pianist as a poetic songwriter and singer. Let’s invite us to discover Gervay Brio as a vanguard and spiritual international artist-deejay-producer, his skill, and experience serving dance-floor Earth ! With powerful rhythmic, hypnotic sequences, glowing guitars, and evocative lyrics, Gervay Brio, reveals his talents as a unique composer, writer, musician, and producer, just listen his new hit THE SAME WAY !

ABOUT
Gervay Brio living in Paris is born closed to Saint-Malo, Britanny Celtic west part of France, land of corsairs and knights, studied classical music since childhood and later at Rennes and Nantes conservatories, also psychology and law at Nantes University. Gervay began his first band during the end of psychedelic years and started producing first New Age music in France, after he met with great oriental spiritual masters as His Holiness Karmapa XVI introducing Gervay to meditation or Nagueswara Rao who teach him yoga of sound and Indian music. For the new Millenium Gervay became a deejay and played in main clubs in Paris, Miami, New York, Saint Tropez, Hwar, Dubrovnik, Malta… Till today Gervay Brio continues to produce his music with a unique signature, blending his spiritual and music experience for the benefit of all, increasing every day his worldwide audience.
“ Maestro Dj & Guitar Hero in One! “ Dj Magna /USA
“ Never question a master Dj, Gervay Brio brings it! “ Dj Johnny D. /USA
“ Amazing music! “ Chestney Brewer/England
“ Ok, this is outstanding! “ Estepa Charles/Australia

Have you always been interested in music? What is your story and how did you start making music?
I learned music and classical piano when I start to read and write as a child and since I always had a deep connection with the language of soul, invisible but so powerful. I start wanting to be an artist with Jimi Hendrix who was the God of my generation who made revolution by music, so I began learning guitar and made my first band. I traveled in different styles, but always looking for “The Blue Note” and have my own signature.

What are you working on now? Any future releases we can look forward toToday ?
I publish my new single THE SAME WAY which is an anthem to Universal Love in these crisis times, I hope to give support to people, help them to cross the bridge !
It’s difficult today to know what’s next, as the music industry and web distribution are so cruals, as artists we only get 0,45% of our work, worst than any slave, any time !
It has an impact on creation, as today we no more produce albums but singles, as the promo is so hard and expensive, it’s sad to no more be able to express in a full concept album, today people just consume tunes or tracks like they take pills !

What Is Your Ultimate Goal In The Music Industry ?
As I just said there is not ultimate goal in the music industry today, till they treat artists worst than slaves, I stay an independant artist as did first Mozart who was already facing piracy and monkey business on his music. Great artists like Michael Jackson, Prince, Frank Zappa were in war with music industry who probably kill them, as today we can more speak about mafia better than art, just have a look to the tv serie « Empire »…

What Has Been The Biggest Challenge In Your Career Thus Far ?
The biggest challenge was when I came to Miami Winter Music Conference to present my song “Incandescent” feat Diva Avari, knowing nobody. I was supposed to stay one week, I stay three month, be named “Maestro Dj” by the jury and be invited to play in best clubs of Miami Beach as my residence at Tantra.
The second one was to get the Akademia Music Award Los Angeles with my song “One Knight In Malta”, inspired by my trip on this beautiful island, it was a great surprise and honor.
The third one was to act in the Randal Wallace movie “The Man in The Iron Mask” beside Leonardo DiCaprio and Jeremy Irons, a travel beyond time with so great people, it was like a dream.
I’d like more to work for cinema as composer and actor, I have an Opera movie waiting for it.

How do you go about writing a song? Do you have a melody in your head and then write the other music for it or what’s Your typical songwriting process ?
Usually I don’t even know what I’m gonna play and it’s the surprise who makes the song, sometime it comes with the piano or the guitar, sometimes with the machines and the beats, or some words come into my mind first, there is no rule, I work like a “shaman” (cf. my book “The Shaman & The Deejay” Amazon.com).
As musician I love improvisation like in Jazz or indian music and also in my dj sets, music has to come from inside not from outside like many believe, u have to let space in you to receive the music and let herself guiding the process. Production is an other step who can take much time than pure creation.

How do you feel the Internet has impacted the music business ?
For the best and the worst, as I can see in my career, never my music had been so much distributed and shared worldwide, but I never get so few income in my life ! I already answered to that question before, all I can add is my total support to all artists in the world who claim they rights when we don’t even have One cent on one dollar sell, doing all the work all the promo, we have here predators who manage music has dealers with coke, both get money not us, at this rhythm we can say we’re gonna be the last artists, everything is prepare for this extermination who has already began !

List some famous musicians currently on your playlist ?
I spoke about Jimi Hendrix, but also Miles Davis that I was blessed to met, Carlos Santana or Mahavisnu, Frank Zappa who really inspired me like great brothers with their sound and spirit.
On the Deejay side I love Nick Warren, Sacha, Dubfire and those who are creative, not playing presets with hands up or paying talented ghost shadow mens…

What Did You Do Before You Started Making Music ?
I was a baby !
Music helped me all my life to grow as the man I ‘m today, it’s the soundtrack of my life.

Would you have any advice for young people wanting to follow in your footsteps ?
Take care u’re a real artist or u’ll burn yourself and respect those who came before u !

If you could change anything about the music industry, what would it be ?
No more industry, we do not need any more vampires on our back, let’s the music free but let’s get the rights !
We have all the tools today to be free from this toxic criminal organisation, who just produce fake celebrities, when they are so much great artists who can’t get what became this luxury.

How do you feel about originality?
For me music comes from our origine, it’s why it’s so attractive all over the planet since ages, it’s the language of nature and spirit, to guide your emotions (or destroy them) and balance ur being. Plato said “If you want to rule a people, control his music”.
Music has much power than we think today, in a part of my life I became music-therapist and learned indian yoga music, which is based on these precious rules of music.
On an other aspect a piece of music has to be original to be a piece of Art.

Is there anything else we should know about you? or Something that you would like to add ?
“He who knows does not speak he who speaks does not know” said Lao Tseu, it’s better for a musician to play and be heard than speaking too long, I invite u to read my book to know me better and listen to my music which is a message to your heart.