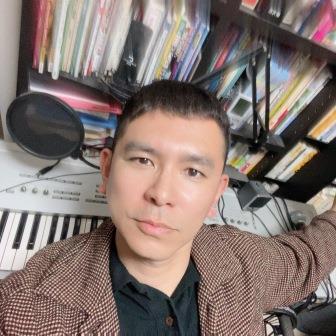 Matsuoka Apollo was born Miyake Nobunori on August 3, 1973 in the countryside of Hyogo, Japan. He started to play the piano almost by himself at the age of 5. In his elementary school days, he played Japanese Pop by ear. When in high school, he met American culture through American Top 40. He was strongly influenced by Madonna and decided to be a songwriter. He moved to Tokyo to study humanities at Waseda, one of prestigious universities in Japan.
There he learned several languages and traveled around the world. Also, he joined a Songwriter’s Club to share his songs. Soon he got connected with some major record companies. Through an audition, he met Kuniko, a female vocalist and won some contests with her. He was introduced as an up-and-coming artist on NHK, national broadcast. However, when Kuniko was in the United States, 911 happened. And in the chaos after the accident, he parted from his partner. Then he got married with a woman when he traveled in Paris. When playing in New York, he met Valerie Simpson and with her advice he started to make songs in English.
In the meantime, he got two daughters and had to spend some hectic time.
Now he regained time for music, and with the help of DAW and the Internet and with his passion, he started to create his music again. Now he is focusing on creating a new philosophy suitable for the new era.

Have you always been interested in music? What is your story and how did you start making music?
I have loved music all my life. When in kindergarten, I asked my parents to take the piano lesson. However, it was not easy for a country boy to start it because it was a little strange thing in a conservative place. But having asked them so eagerly that they eventually allowed me to do so.
Reaching puberty, I began to feel different from others and had a hard time to fit in the circumstance, when I got messages from the artists overseas saying you can express yourself. It was not long before I started to express my own feelings by making music.

What are you working on now? Any future releases we can look forward to?
While promoting my latest song Every Day, I have been working on my new song, which is a cheering song for the youngsters all over the world going through hardships. It will be released at the end of 2021.

What Has Been The Biggest Challenge In Your Career Thus Far?
September 11. It led to the parting from my musical partner and to the loss of the initial chance of commercial success.

How do you go about writing a song? Do you have a melody in your head and then write the other music for it or what’s Your typical songwriting process?
Music always suddenly come down or come up on me. Youngsters are one of the most influential sources of my music. Sometimes I pedal my bicycle as my music flows.

How do you feel the Internet has impacted the music business?
It gives a big chance to a singer songwriter like me who is alone and want to connect to the world. I can’t not thank it enough.

What Did You Do Before You Started Making Music?
I had been a huge fan of music., especially J-POP and American Top 40.

Would you have any advice for young people wanting to follow in your footsteps?
I want them to study languages harder. They make open the door to the new world.

If you could change anything about the music industry, what would it be?
I want to make the global chart truly global. There are lots of great music outside the English speaking areas.

How do you feel about originality?
Originality doesn’t mean doing new things. It is full of respect for the past and contemporary music and honest to the true feeling inside.

Is there anything else we should know about you? or Something that you would like to add?
I am a Japanese who think globally.
I am a man who have a great sympathy with LGBTQ community.

My latest song Every Day is being viral in Nigeria.

Links to Where Your Music Can be Purchased: For purchace
Tunecore
https://www.tunecore.co.jp/artists/Matsuoka-Apollo